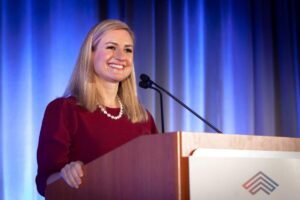 The Greater Phoenix Chamber recently hosted the Valley’s business and government leaders for a discussion with Phoenix Mayor Kate Gallego on the future of Phoenix as we look ahead to 2022. During the interview, Todd Sanders, Chamber president & CEO, asked Mayor Gallego about some of Phoenix’s greatest opportunities. See some of the top takeaways from their discussion.

How have these past few months been for the City of Phoenix and is there anything you’re specifically proud that was accomplished or launched?

Former City Manager Ed Zurcher is retiring after changing a significant budget deficit to an impressive budget surplus today. Mayor Gallego and the City of Phoenix celebrate and thank Ed for his service and welcome Jeff Barton as the new City Manager.  The city has also launched some important programs within the last year including the new Community Assistance Program. This program will cost $15 million and have social workers out in the community responding to emergency calls. This should take some of the pressure off police responding to calls about addiction or homelessness. People will then be connected to services with many of the local institutions and resources.

Congress has been wrestling with President Biden’s infrastructure bill. What did Phoenix get in that deal?

The city is utilizing the Federal American Rescue Plan funding to help support 47 different programs including infrastructure investments, restaurant support, and Convention Center support. Phoenix must be on the forefront of preparing for infrastructure changes as the city’s population grows. Within the President’s Infrastructure Bill, Sky Harbor Airport is expected to get some funding support alongside important investments in cybersecurity. The bill will also aid Western water infrastructure in and around Phoenix. The city is also focusing on the future of electric vehicles.

Last year, you announced Phoenix’s largest economic development deal and Arizona’s largest foreign investment in history with the Taiwan Semiconductor Manufacturing Co. locating here to manufacture computer chips. What impact have we already seen as a result of TSMC?

Every level of government was involved in this historic investment to the Phoenix area. The City Council has been working to attract suppliers, and unanimously laid out a supplier campus area. Mayor Gallego wants the economy to benefit as much as possible from TSMC’s investment in Phoenix.

Are there any other exciting economic development investments or projects in the works as we look toward 2022?

The City of Phoenix proudly announced that Tufts University School of Medicine is coming to Downtown Phoenix. They will be making a significant investment to the region and people will soon be able to get a doctorate in physical therapy. The region is also seeing more physical therapy needs related to COVID-19 complications. This is just the first of many investments Tufts is expected to make to the Phoenix area.

As we’ve all seen while driving around the city this year, there are quite a few transportation and infrastructure projects happening as we ensure Phoenix can sustain our rapidly growing population. What is the status of these projects and why is this investment is so critical to Phoenix’s future?

The Census data for Arizona was just released saying 86% of the growth was in Maricopa County. Mayor Gallego sees transportation infrastructure investments, including the freeway system and light-rail, to be a main contributor to the population growth. Regionally, the city hopes to renew Proposition 400, the county-wide sales tax, to continue adding to Maricopa County’s infrastructure needs. The County and Mayors across various cities regionally have unanimously approved a plan to present to voters to renew Prop 400 in the upcoming election.

How can business and government really focus on emerging opportunities to fill job gaps?

The City of Phoenix has been working with companies such as Southwest Airlines and American Airlines to donate equipment for students to work on and learn from. The city also works with local high schools to partner with Sky Harbor Airport to enhance training opportunities. Additionally, the City of Phoenix is also partnering with community colleges to help parents who are interested in a career transition with childcare needs.

Phoenix now has the first-in-the-nation Office of Heat Mitigation and Response. How did that come to be and what do you hope it will accomplish?

The city is looking at solutions to better protect workers who are most vulnerable to heat related illness and death. Cool creative solutions are also being investigated at the new Office of Heat Mitigation and Response. In partnership with Arizona State University, local experts have created a sealant for pavement that is a lighter color and doesn’t absorb as much heat. ASU reports this new sealant is 10-12 degrees cooler. Local businesses are also encouraged to partner with the Office of Heat Mitigation and Response to come up with more innovative heat-related solutions.

You’re headed to Glasgow soon for the COP26, the UN Climate initiative. What do you hope to accomplish and what could it mean for Phoenix?

Mayor Gallego hopes to tell the story of what is currently taking place in Phoenix and share this knowledge on an international level. The City of Phoenix is excited to be a part of the conversation to find solutions surrounding climate change.

What is the City of Phoenix doing to make sure we have an adequate water supply in the future?

Former Mayors and the City of Phoenix have been preparing for this issue for the past decades. The area has been diversifying its supplies. Arizona is lucky to have water support from the Central Arizona Project, the Colorado River System, and the Salt River Project. Phoenix also has partnerships with other cities and tribal nations to diversity water supplies and store water. There are also great investments happening with water conservation efforts including new wells and pipelines.

Phoenix is continuing its work on “Smart Cities”. Please explain what that involves and why it makes Phoenix a much better city?

The City of Phoenix is trying to use new technology to make the area better for everyone. One example is within our transit system where we are trying to make it easier to upload mobile passes or re-loadable passes. Also, in alliance with the Planning Department 80% of permits are now available to be submitted online. The City of Phoenix also hopes to have smart technologies regionally to make commutes easier.