GPC in the News The presidents of the three Arizona public universities said that their institutions flourished during the pandemic, but the post-COVID changes in the economy will require more support from the business community and the Arizona Legislature.

The three leaders spoke at an event sponsored by the Greater Phoenix Chamber of Commerce at the Musical Instrument Museum in Phoenix on Thursday.

“For us, the pandemic has been very disruptive, driving our innovation even more quickly.”

José Luis Cruz Rivera, the new president of Northern Arizona University, said that although Arizona is drawing high-paying jobs, the state’s low rate of educational attainment will keep those jobs out of reach for Arizonans. A current ninth-grader in Arizona has a 17% percent chance of getting a bachelor’s degree by 2029, he said.

“We have to make sure the current generation of Arizonans has the opportunity to contribute to the economic growth of the state,” he said.

Cruz Rivera said that NAU will soon formally announce a new initiative in which students who are admitted who come from families with a household income of $65,000 or less will get free tuition.

“We expect this will do wonders for the aspirations of high school students from underserved communities across the state who may not have thought that there was a possibility of higher education in Arizona,” he said.

Robert Robbins, president of the University of Arizona, said that investment in early childhood education is vital for the success of the universities.

“While most universities saw a decrease in enrollment, we’re seeing increases in enrollment and the most accomplished and diverse class we’ve ever had,” he said.

“But a lot of the decreased rate of high school attainment, which affects what we do in higher education, can be traced back to early childhood education. If, by the age of 4, you don’t have a certain number of words in your vocabulary, you’re pretty much destined not to go to a university.”

Crow said that the business community needs to step up its support of higher education in order to prepare the state’s workforce for jobs that will require post-secondary credentials.

“In many states, the universities are important to the business sector. They’re prized,” he said. 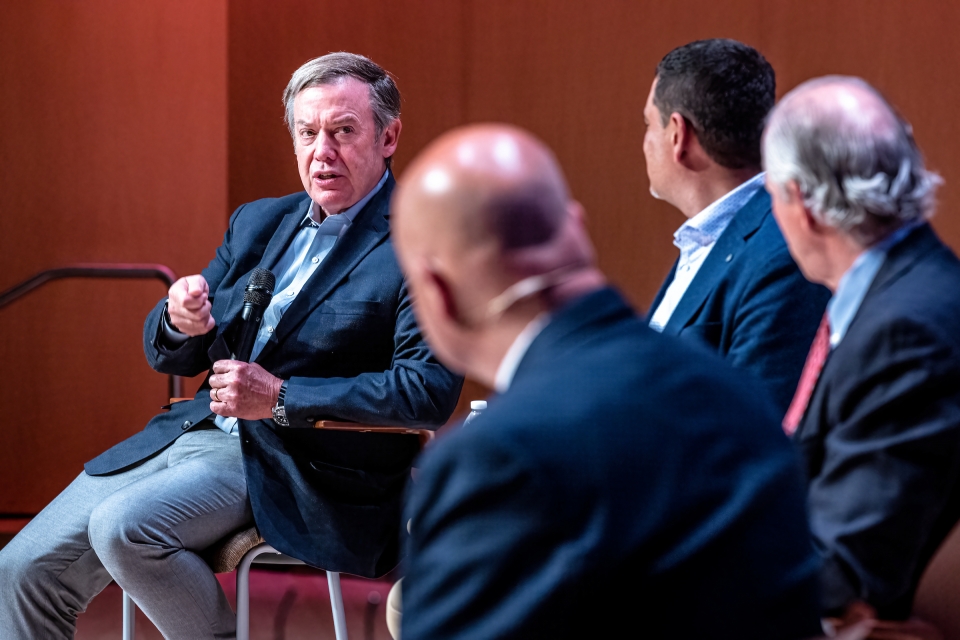 He said the universities need two things from the state legislature with the support of the business community.

“We need half the cost of attendance of students from the state of Arizona, and we’ll keep the cost in the lowest 10% of research universities,” he said.

“But no one will agree to that.”

Second, the universities need funding for special projects to benefit the state, which the legislature funded in 2021 – the first positive investment since 2008, he said.

Arizona’s per-capita investment in higher education ranks 49th, which will not prepare the workforce for the changes ahead, he said.

“The business community should see the bargain we’ve got here, and they don’t see it. Their interests are too narrow. They’re not playing the long game,” Crow said.

Cruz Rivera said that he’s still trying to figure out the education funding model in Arizona, after working in higher education systems in California and New York.

“If we agree that we need more people with post-secondary degrees to make this a wildly competitive economy, then why is it our third-year nursing students are funded $2,500 less than a third grader in Arizona, and we know that our third graders are underfunded,” he said.

Crow said that despite the drumbeat of negativity from cable news stations, most residents agree on what’s important. A statewide survey by the Center for the Future of Arizona last year found several key issues on which the majority of respondents agreed.

“People want jobs with dignity for their children, pathways to attainment for family members, blue skies and clean water,” he said.

“We haven’t decided what we want to be.”